Extending a public apology is not very different from delivering a private one—the ingredients of any effective apology remain the same.

The only real difference is that some of these apologies can become famous in their own right, or make others infamous for screwing up. 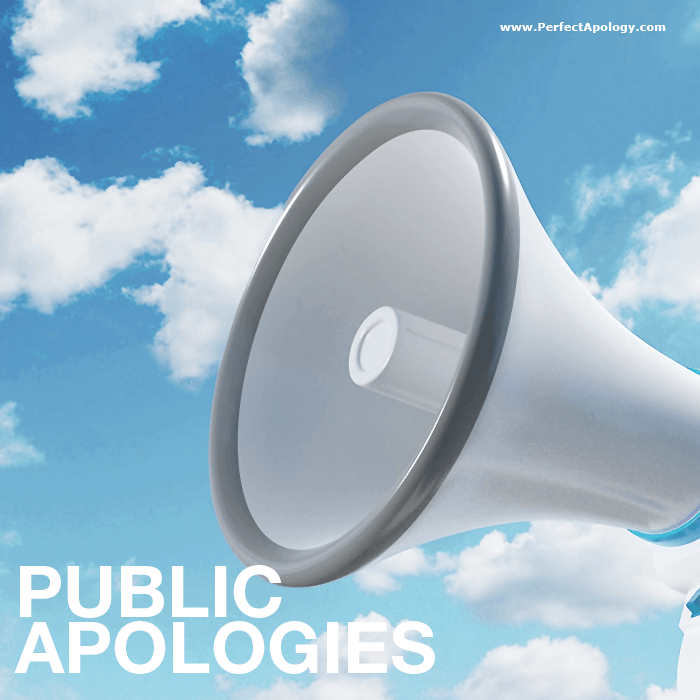 A public apology delivered by celebrities and other well-known figures in the news and popular culture has an uncanny way of reminding us that 'to err' really is human. It really doesn't matter who you are, at some point anyone can find themselves in the doghouse for something they said or did.

This section of the site will explore, comment on, and review some of the best and worst public apologies ever delivered so that we may all gain a better understand of what to do and more importantly what NOT to do.

Public apologies know no boundaries. They extend from the Vatican, to the US Senate, to sports icons, corporations, Hollywood, and beyond.

Whether these apologies succeed or fail, a great deal can be learned from them, because they often provide great insight into the art of delivering the perfect apology.

For example, in January of 2020 Disney CEO Bob Iger issued a public apology via Twitter which ended up being a brilliant PR move and a lesson in corporate humility. Apparently a local PTA chapter screened a Disney film as part of a fundraising event without permission. They were fined $250 by Disney's licensing agency.

Iger took to Twitter. He used his personal account to apologize and offer a personal donation. Iger tweets,

Our company @WaltDisneyCo apologizes to the Emerson Elementary School PTA and I will personally donate to their fund raising initiative.

No question that the PTA was 'legally' in the wrong here and one needs to protect their copyright & intellectual property. However in this case, it's the PTA of a local elementary school looking to raise funds.

$250 represents over 30% of what the PTA raised and is likely less than Disney's daily budget for staples at one of their parks.

An article at INC.com sums up the situation perfectly,

First of all, Iger's move cost him and the company almost nothing. And it was absolutely the right thing to do from the perspective of being a good human being. That said, it was also a brilliant way to show corporate humility, and turn a potential embarrassment into a win for everyone involved.

The free PR for Disney from this Iger tweet? Priceless.

For more on Disney, read our case study and their perspective on apologizing.

Turning to politics we take a look back to 2006 and John Kerry. In a review of a public apology delivered by John Kerry we learn how not extending a complete apology from the outset can create more damage and hurt than the original offence.

In an article on Political Apologies & American Democracy we learn how a misstatement can sometimes gain momentum of its own and overshadow good intentions.

In a commentary by Peter F. Goolpacy, he asks Where are the Duke Apologies? following the debacle of three Duke University lacrosse students falsely accused of rape.

We also learn why Don Imus' apology for insulting the Rutgers University Women's Basketball team (and the public at large) was doomed to fail.

We also cover The Perfect Terrible Apology: A Case Study of David Shuster and MSNBC after Shuster posed an inappropriate (and offensive) question regarding Chelsea Clinton's role in her mother's campaign during an on-air political discussion.

On the flip side, we take a look at David Neeleman's Jetblue Apology (which, in both its execution and delivery) is as close as one can get to crafting the perfect business apology.

In our never ending pursuit of the perfect public apology, we review some other noteworthy mea culpas in the following case studies:


By examining cases of how public figures succeed and/or fail to apologize we can better understand our own chances of being forgiven.

Given the sorry state of public apologies, even the media is sometimes interested in figuring out what's going on. Read a Q & A session we had a few years back with a reporter from the Sacramento Bee on apologies in the media.

As apologies continue to get media coverage, we are getting more requests for our take on things and why the American public in particular is so interested in these mea culpas—and given the amount of breaches and CEO dismissals these days, corporate apologies in particular.

Read our business apology case studies which includes a full review of one of the biggest and earliest worldwide public apologies offered by Toyota.

The fact that people in the public eye have well paid publicists supported by huge public relations firms makes their apologies so fascinating to witness and study. If these people can't deliver a proper apology (or public apology) then what hope is there for the rest of us?

What we've learned through all of this is that even large Public Relations firms can screw up by missing the point, making excuses, and by overlooking the straightforward strategies outlined on this site.

The #MeToo movement offers further insight into what works and what doesn't, with many prominent men and public figures apologizing for their sexual misconduct in an annotated article titled Mea Culpa. Kinda Sorta. from the New York Times.

While on the topic, we've compiled a complete listing of quotes for Bill Clinton's public apologies following the Monica Lewinsky affair back in the late 90's.

It will be interesting to see if we, or anyone else, will ever need to compile a list of Donald Trump apologies.

Check back often for new reviews of the most interesting famous apologies. By seeing what they did right and what they did wrong, these types of unique or crisis driven apologies teach us how we can apologize more effectively.