What's better for your business? Writing a letter, sending a quick note, or shooting off an email? What kind of business apology letter should you write and when are you better off apologizing over the phone or in person? 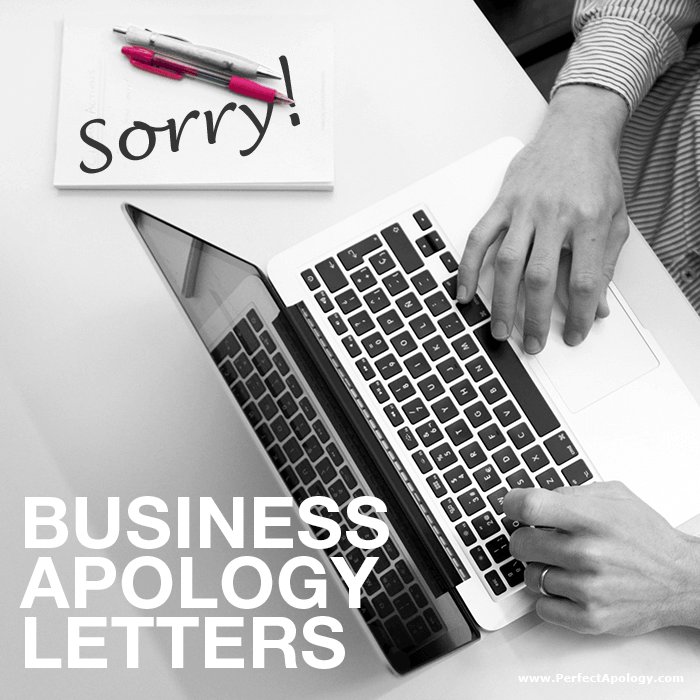 The right call will always depend on your particular situation and the relationship between the parties involved. However, in most cases, a well-crafted business apology letter is more often than not the safest approach especially when the relationship is not 'personal'.

That's why our template letters below, which cover the most common business issues are a useful part of any customer support strategy

TIP: Never assume the relationship is personal and friendly unless you're absolutely sure. A business apology based on the wrong assumption can be potentially harmful and counter-productive.

The #1 benefit to writing out your mea culpa is that a letter of apology, sent via regular mail or email gives you the time to choose the right words and allows you to make sure that all the 'elements' that you need to include are in place.

In business, it simply costs much more to acquire a new customer, partner, or vendor than to retain an existing one so it's important that you get it right the first time.

Finally, an added benefit with written apologies is that they can be archived and stored for future use.

That means that over time you'll end up with a set of sample apology letters tailored to your business that will allow you to quickly respond to similar situations in the future.

Apologizing to customers, vendors and business partners is all about acknowledging your side was at fault and taking the necessary steps to remedy the situation while minimizing any further inconvenience for the injured party.

Do be specific about what happened. In the case of an error or some form of delay, state clearly when you can, why it occurred. For defective or damaged goods, let them know why it happened and how it's not the norm. Don't be vague or leave things unresolved.

Do acknowledge the hurt caused from the customer's point of view and that you appreciate and care about the inconveniences caused to them. Think through the implications for them, and validate their position and feelings. Don't wash over the inconvenience or implications caused by the issue and don't play down their feelings.

Make no excuses. Plainly state that your side was in the wrong, say you're sorry and apologize. Again, clarity is key so don't give any form of non-apology.

4 Include a statement of regret

The injured party needs to know that you regret that this happened, that it happened to them, and that the whole issue is contrary to your (and the company's) standards.

Do let the injured party know how important they are to your business and that you don't take them for granted and value their patronage. Let them know the steps that are being taken to ensure that a similar situation won't happen again. Don't promise it won't happen again without backing up the promise.

6 Provide a form of restitution.

For defective goods, billing errors, and other objective mishaps, do offer an immediate refund. Poor service on the other hand can be more subjective so you need to evaluate the importance of the relationship to gauge any compensation you may offer. But, always remember that it costs much more to acquire a new customer than retain an old one.

Now let's see how the breakdown works in practice with our template letters below.

Sample Letters of Apology for Business

TIP: If you're looking for more apology letters that you can work with right away, we like these guys. They have great sample letters reviewed by lawyers in Microsoft Word (and other formats) available for download.

A letter of apology in business can be sent three different ways each conveying a slightly distinct (but meaningful) measure of seriousness and respect.

A letter sent by courier or priority post, for example, conveys more importance than regular mail, and regular mail more than an email, even today. So although the letter's content may be identical and all three approaches provide the injured party with a tangible piece of evidence that acknowledges the business mistakes made, and the inconvenience suffered, some situations require additional signals.

As an example, sending a letter by courier when both parties know that it could've been done through email sends a strong message that you understand the seriousness of the situation and speaks volumes to the recipient beyond the written words.

On the other hand, if the parties involved have more than a strictly business relationship then the manner in which the apology is delivered needs to be looked at more closely.

If a customer or vendor frequents the business premises on a regular basis, or is spoken to often over the phone, and a sense of familiarity has grown as a result, then a verbal apology by phone or in person may be more appropriate. This is also true when apologizing to your boss or superior. In fact, if a more formal approach is used it may signal to them that their assumptions about the nature of the relationship are wrong.

TIP: Make sure to jot down some notes on paper prior to apologizing so that you're prepared and know exactly what needs to be said for your apology to be effective.

Choosing whether to apologize by telephone or in person is largely dependant upon timing and geography. Assuming the apology's recipient is within reasonable geographic proximity the decision should be made based on when you will next see the person. In some cases, depending on the nature of the error, taking the time to make a longer trip in person may be the right thing to do.

If the delay is reasonable and the cause for the apology is not too severe then waiting until the next time you see one another is acceptable. However, if one or neither of these conditions is true then picking up the phone or meeting them face-to-face (as soon as possible) and extending the apology is recommended.

If a similar situation occurs, but the injured party in this case is not a customer but instead a partner, vendor, or boss, then a verbal apology is still appropriate and should be followed up with a business apology letter to acknowledge that you understand that although there is familiarity this is still a business relationship.

When it comes to business, apologizing for mistakes made is critical.

People understand that things go wrong sometimes and will accept an occasional mistake. What they won't forgive however is how things were handled once those mistakes were made.

So remember to always tailor the manner in which you deliver your mea culpa with the same care that you take in preparing for a verbal apology or writing out an apology letter.

Think about the situation, the mistakes made, the parties involved, and consider the best way to make amends so that your business relationship will survive and thrive well into the future.

Learn about timing an apology or find out what exactly needs to be included in an effective business apology letter.