Writing an apology letter to a teacher or professor is quite common. Since students spend the majority of time at school, it's inevitable that at some point issues will arise.

The most frequent infractions in a school environment that warrant an apology from parents and students include: misbehavior (behavior in general), absence from class, poor performance, cheating or plagiarism, being late, or talking in class. 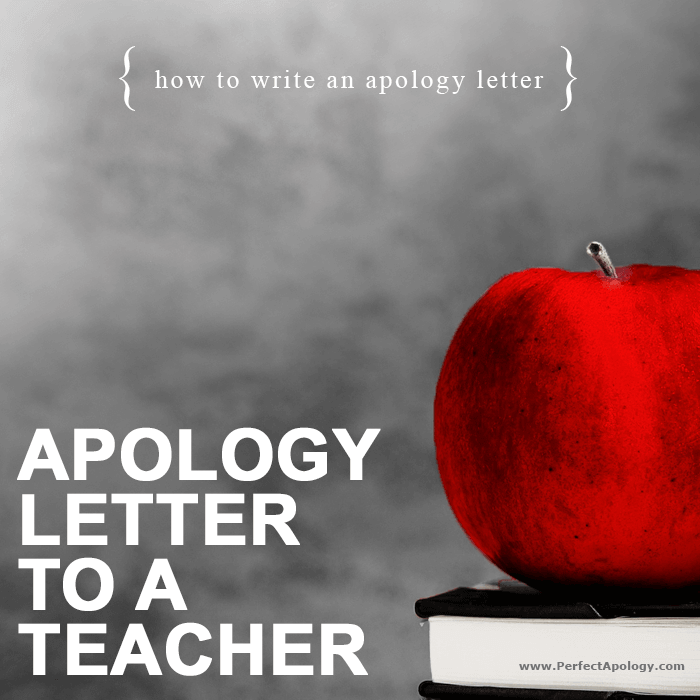 Obviously, some infractions are more serious than others. For example cheating and plagiarism are certainly more consequential than misbehavior or being absent from class. Nevertheless, both could have serious implications on a student's success.

Regardless of the seriousness of the infraction, learning how to write an apology letter to a teacher and then taking the time to craft a sincere apology letter is an important first step on the road to making things right again.

How To Apologize to A Teacher

Although a verbal apology may be sufficient, an apology letter is always better. It conveys a level of respect towards the teacher and acknowledges the gravity of the matter at hand.

Given that, it's the seriousness of the infraction that will determine the length of the letter.

In other words, a shorter letter is fine for things like late work and missing class, presuming these weren't significant issues. However a longer letter is warranted for plagiarism, misbehaving, or missing major deadlines.

Sample Apology Letter to a Teacher From A Student

This first sample apology letter is from a student to a teacher and can be easily tailored to your own situation. The column labeled 'Notes' will help guide you through the process.


Sample Apology Letter to a Teacher From A Parent

This second sample apology letter is based on a letter from a parent to a headmaster. They titled it Sorry For Our Child's Behavior and posted the letter to our site. It's a great example of letter of apology to a teacher or principal and can be easily tailored to any situation by a parent or guardian.

As a parent, you want to acknowledge your child's unacceptable words or actions while still showing faith in their ability to behave differently and do well by the school in the future.

As before, we provide notes to help guide you.


Tailoring Your Own Letter of Apology to a Teacher

By breaking down both the student's and parent's sample letters and providing notes alongside each section, you can see how easily it can modified to any situation where an apology letter to a teacher or professor is needed.

The order of the statements is not important. What is important is that the teacher understands that you sincerely regret what happened, are taking responsibility for your own, or your child's behavior and apologized. And finally, that you are determined that it will not happen again.

Next step to consider: Your apology letter format. It plays a role in how effective a letter can be and how open the recipient will be to accepting your apology.