Business is just starting to comprehend something many psychologists and economists have known for decades about human social behavior—people hate to lose more than they like to win.

In other words, failures loom larger than successes. 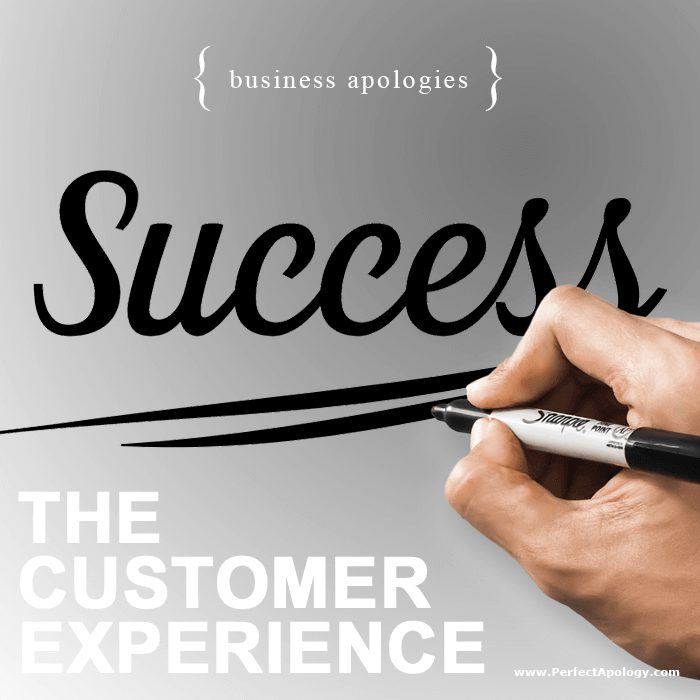 Daniel Kahneman was awarded a Nobel Prize in Economic Science for uncovering the implications of this theory for many of the decisions and choices we make in our daily lives.

His straightforward yet brilliant observation is directly relevant to the challenges facing business today. It also explains why crafting the perfect apology is becoming so important.

For example, in the airline industry, the positive effects on customer satisfaction of experiencing several event-free flights can never compete with the negative effects of one cancellation or delay—and that's the problem.

On the other had, successes (smooth business transactions or event-free flights) are always expected and irrelevant—when a transaction or flight goes well nothing really happens, which is why customers ignore them. We never see media coverage of a house's tornado miss.

With this in mind, a proactive approach to customer experience for any business is becoming increasingly crucial to maintaining high satisfaction levels, because sh*t happens.

If Kahneman deserves his Nobel Prize then it follows that there are enormous value added benefits to be gained from addressing failures. Conversely, investments to improve the quality of a business transaction or typical flight will produce diminishing returns over time and are often a waste of money.

The marketing power of apologies in the airline industry was covered in an excellent article by Jeff Bailey, published by the New York Times. A good part of the article focused on Fred Taylor Jr., senior manager of proactive customer communications for Southwest Airlines.

Fred's 12 hour day is typically spent looking for failures and then crafting the perfect apology to address them. According to the article, Fred writes on average about 180 letters each year to approximately 20,000 passengers.

We've written extensively on the core ingredients of perfect business apologies—for example, acknowledgement of the hurt/damage; acceptance of responsibility; an explanation; a statement of regret/humility/remorse; some form of restitution or compensation, etc.

Two of the ingredients, credibility and humor, were highlighted in the New York Times piece on Southwest Airlines.

With respect to credibility, it's very important for customer service representatives to have detailed information about the specific failure in order to convey in the letter an honest measure of understanding and sympathy for the passengers who experienced the problem.

Humor (when appropriate) is another ingredient that can help, although it goes without saying that joking about an event that disturbed many people could backfire.

However, there are occasions in which humor can help (especially when followed by some form of compensation).

In one of the letters of apology sent out to Southwest passengers after a flight was forced to return, Fred Taylor wrote:

During the return, a customer became ill and apparently decorated three rows of seats—and perhaps a few customers. No word on how Linda Blair is doing.

The marketing benefits are obvious—a well crafted apology letter will not only help to retain customers who may otherwise be looking for another airline, but it also leaves a positive impression with those who were told about both the bad experience and the proactive letter of apology, and those who read about Southwest's approach in the media.

Consider the free advertising Southwest Airlines gets from the New York Times piece.

Turning a bad experience into what amounts to an advertisement for the business was best demonstrated by JetBlue.

The apology letter to JetBlue customers written by founder David Neeleman, the video that was posted on You Tube to express his regret, and the announcement of JetBlue Airways Customer Bill of Right amounts to the perfect business apology—in fact, it's likely to become a generally accepted standard for how business errors should be handled.

Like Southwest and JetBlue, all businesses in every industry are sending off more letters of apology than ever before, precisely because they work.

However, this trend also conveys a very serious problem facing most businesses today—customer standards for measuring performance are shifting upwards to accommodate rising expectations—people expect better service and automatic compensation when their expectations are not met.

So any discrepancy between the service customers expect and the level of service a business appears to be delivering will increase customer dissatisfaction. As expectations rise, smaller failures become increasingly more unacceptable and costly—another effect of Kahneman's theory.

If expectations and standards continue to rise, and if smaller failures continue to loom larger than major successes, then crafting the perfect apology for a variety of situations involving an increasing number of disgruntled customers will become even more important.

The most difficult challenges for businesses today is that they are competing at a global level where access to goods and services (and independent customer reviews) are just a click away.

As for the airlines, even those who accept the importance of issuing apologies, they have to operate in a post 9/11 world in which the world's addiction to security will inevitably lead to more restrictions, scheduling problems, delays and cancellations, particularly if we experience other major security failures or terrorist attacks.

Consequently, the need for a proactive approach to customer advocacy that institutionalizes the art and science of apologies is becoming more crucial for companies trying to survive in the 21st century.