Best 33 Forgiveness Quotes to Inspire You

Quotes about forgiving, or "forgiveness quotes" speak to our common ultimate goal when apologizing.

Much like their apology counterparts, there are many different ways of looking at forgiveness. However, the consensus seems to be (by those most often quoted on the subject) that forgiving someone is more beneficial to the forgiver than to the person who is being forgiven. 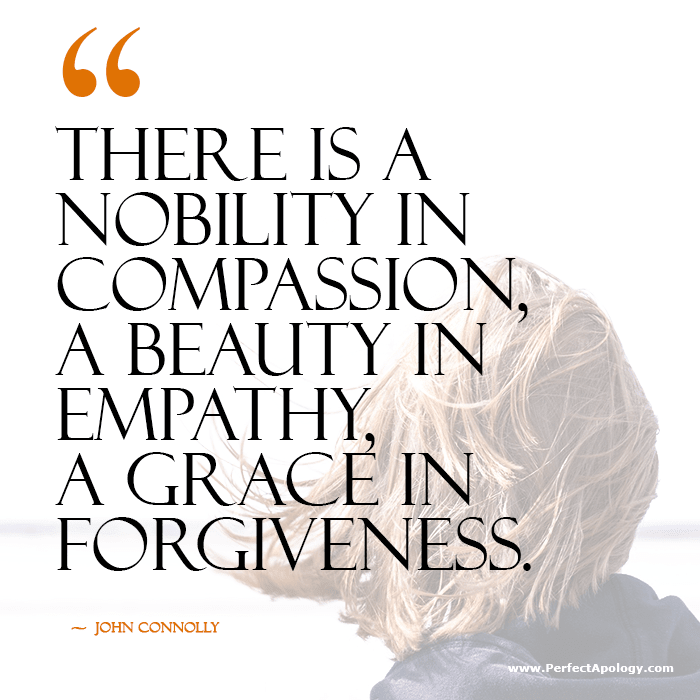 Below is a listing of quotes that offer insight into the act of forgiving.

Forgiveness is the answer to the child's dream of a miracle by which what is broken is made whole again, what is soiled is again made clean. Dag Hammarskjöld

Forgiveness is a funny thing. It warms the heart and cools the sting. William Arthur Ward

Forgiveness Quotes & Your Own Well Being

When it comes to looking at quotes on forgiveness, there is definitely an emphasis on how important it is for your own well being to forgive.

Forgive all who have offended you, not for them, but for yourself. Harriet Nelson

He who cannot forgive breaks the bridge over which he himself must pass. George Herbert

Forgiveness does not change the past, but it does enlarge the future. Paul Boese

There's no point in burying a hatchet if you're going to put up a marker on the site. Sydney Harris

Nobody forgets where he buried the hatchet. Frank McKinney

I can forgive, but I cannot forget, is only another way of saying, I will not forgive. Forgiveness ought to be like a cancelled note—torn in two, and burned up, so that it never can be shown against one. Henry Ward Beecher

To forgive is to set a prisoner free and discover that the prisoner was you. Lewis B. Smedes

Forgiveness is the fragrance the violet sheds on the heel that has crushed it. Mark Twain

Once a woman has forgiven her man, she must not reheat his sins for breakfast. Marlene Dietrich

The weak can never forgive. Forgiveness is the attribute of the strong. Mahatma Gandhi

It's far easier to forgive an enemy after you've got even with him. Olin Miller

There is no revenge so complete as forgiveness. Josh Billings

Without forgiveness life is governed by... an endless cycle of resentment and retaliation. Roberto Assagioli

One thing you will probably remember well is any time you forgive and forget. Franklin P. Jones

Never does the human soul appear so strong as when it forgoes revenge, and dares forgive an injury. E.H. Chapin

Always forgive your enemies - nothing annoys them so much. Oscar Wilde

Sincere forgiveness isn't colored with expectations that the other person apologize or change. Don't worry whether or not they finally understand you. Love them and release them. Life feeds back truth to people in its own way and time. Sara Paddison

True remorse is never just a regret over consequence; it is a regret over motive....What we forgive too freely doesn't stay forgiven. Mignon McLaughlin

Yes, this is what good is: to forgive evil. There is no other good. Antonio Porchia

Finally, some quotes and verses on forgiveness from the Bible. Whether you are religious or not, there are lessons to be learned for all of us in these quotes on God's forgiveness.

And the priest shall make atonement before the LORD for the person who makes a mistake, when he sins unintentionally, to make atonement for him, and he shall be forgiven. Numbers 15:28

Bear with each other and forgive one another if any of you has a grievance against someone. Forgive as the Lord forgave you. And over all these virtues put on love, which binds them all together in perfect unity. Colossians 3:13-14

Forgive us our debts, as we also have forgiven our debtors. Matthew 6:12

In him we have redemption through his blood, the forgiveness of sins, in accordance with the riches of God's grace. Ephesians 1:7

Now we who are strong ought to bear the weaknesses of those without strength and not just please ourselves. Each of us is to please his neighbor for his good, to his edification. Romans 15:1-2

If we confess our sins, he is faithful and just to forgive us our sins and to cleanse us from all unrighteousness. 1 John 1:9

Now if anyone has caused pain, he has caused it not to me, but in some measure—not to put it too severely—to all of you. For such a one, this punishment by the majority is enough, so you should rather turn to forgive and comfort him, or he may be overwhelmed by excessive sorrow. So I beg you to reaffirm your love for him … Anyone whom you forgive, I also forgive. 2 Corinthians 2:5-8, 10

We hope that you've enjoyed this collection of forgiveness quotes. If you know of any others that you think should be added to the list please let us know. We'd love to hear from you.

Learn how to use sorry quotes when apologizing or read about forgiveness and the perfect apology.