According to wikipedia, forgiveness is the mental and/or spiritual process of moving past feelings of resentment or anger against another person for some mistake they've made, or ceasing to demand some form of restitution or compensation.

This is also true when it comes to forgiving yourself. 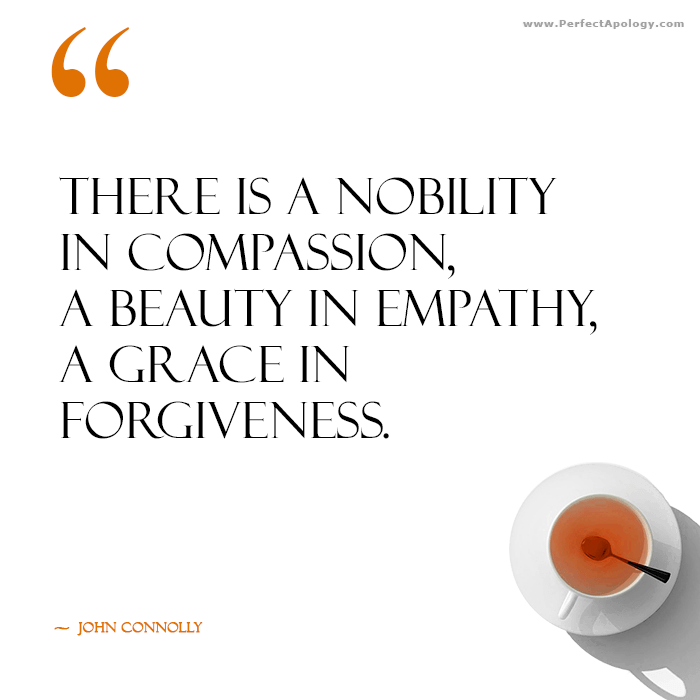 We at Perfect Apology are agnostic about when and under what conditions people should accept an apology or forgive those responsible for hurting them—we certainly know how you should craft an apology to increase your chances of being forgiven, but we can't tell you when to accept an apology.

These are very personal decisions that are never really open to useful advice or guidance.

For whatever reason, and despite delivering the perfect apology, some people are simply not prepared to forgive.

But this fact should have no bearing whatsoever on whether one should take the time to craft a perfect apology. There are other reasons perfect apologies can help when working through a personal crisis.

Remorseful and humiliating errors produce uncomfortable feelings and personal doubts about who we are. They create negative images that directly contradict the primarily positive impressions we have of ourselves.

Serious mistakes that elicit strong feelings of remorse force us not only to question our own character but also raise doubts about whether we actually deserve to be forgiven in the first place.

Forgiveness: To Yourself & Others

Self-forgiveness—the process of accepting the inevitability of mistakes by refusing to let them define us—is an important first step, and a perfect apology can go a long way toward helping us deal with these personal crises. In fact, successful apologies occur most frequently when we first forgive ourselves for the mistakes we've made.

Regardless of whether we are forgiven by others for our mistakes, the act of apologizing—taking the time to craft an apology and suffering the consequences of delivering it—will help to re-establish a positive self image.

That's why it's so important to take the time to do it right, because partial apologies will compound the crisis when they fail. Short cuts lead to failures that often make things worse; they do very little to resolve the crisis and even less to improve your own self image or the image others have of you.

Several of our readers have taken the time to craft an apology to themselves as a first step in healing and forgiving their actions and behavior towards both themselves and/or others.

They are worth the read:

An Apology To Myself
3 Examples of How to Apologize & Forgive Yourself
Dear Me... My Apology & Forgiving Myself

A perfect apology that works will go a long way toward generating the positive feedback we need to manage our personal crises and related feelings of remorse and humiliation.

If people we love and hurt are prepared to forgive us by accepting our apology and moving past our mistake, the message they're sending is that they value our love, the relationship, and respect our character.

The point is that whether or not an apology achieves forgiveness, especially where feelings of love are concerned, taking the time to do it right by making sure your message includes ALL of the ingredients of a perfect apology will pay off in the end. It's worth the investment and the only way to attain what we all seek from others and ourselves, forgiveness.

See our selection of forgiveness quotes or read about expressing regret, if you haven't already done so.