We've compiled this list of regret quotes because sometimes someone says or writes something that is so eloquent that there is just no better way of saying it.

By looking at how others view a given topic, we learn to appreciate different perspectives and gain insight on the lives and thoughts of others. While some of these quotations are humorous and others profound, they all show us how much, we as humans, have in common. 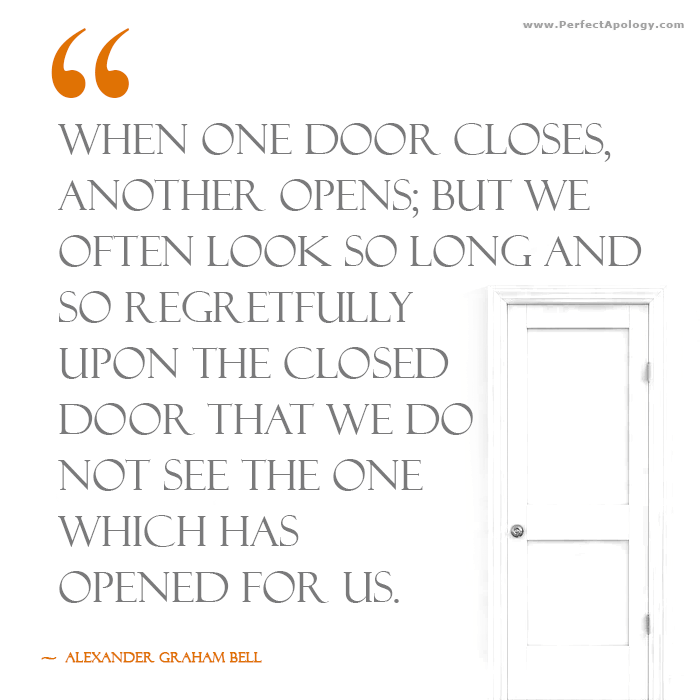 
I'd rather regret the things I have done than the things that I haven't. Lucille Ball

A man is not old until regrets take the place of dreams. John Barrymore

When one door closes, another opens; but we often look so long and so regretfully upon the closed door that we do not see the one which has opened for us. Alexander Graham Bell

I have no regrets. I wouldn't have lived my life the way I did if I was going to worry about what people were going to say. Ingrid Bergman

Forget regret, or life is yours to miss. Jonathan Larson

Make it a rule in life never to regret and never look back. Regret is an appalling waste of energy; you can't build on it; it is good only for wallowing in. Katherine Mansfield

Regrets are idle; yet history is one long regret. Everything might have turned out so differently. Charles Dudley Warner

Below are some more recent additions to our list of regret-quotes. If you know of any quotes that you feel should be added to our list, please contact us we'd love to hear about them.

I have no apologies, no regrets. I gave my very best efforts.... I've been hung in effigy. I've been spat upon. You just have to let those things bounce off . William Westmoreland

For of all sad words of tongue or pen, The saddest are these: 'It might have been! John Greenleaf Whittier

I have many regrets, and I'm sure everyone does. The stupid things you do, you regret...if you have any sense....And if you don't regret them, maybe you're stupid. Katherine Hepburn

The time has come for me to get my kite flying, stretch out in the sun, kick off my shoes, and speak my piece. 'The days of struggle are over,' I should be able to say. 'I can look back now and tell myself I don't have a single regret.' But I do. Many years ago a very wise man named Bernard Baruch took me aside and put his arm around my shoulder. 'Harpo, my boy,' he said, 'I'm going to give you three pieces of advice, three things you should always remember.' My heart jumped and I glowed with expectation. I was going to hear the magic password to a rich, full life from the master himself. 'Yes, sir' I said. And he told me the three things. I regret that I've forgotten what they were. Harpo Marx

Looking back, I have this to regret, that too often when I loved, I did not say so. David Grayson

I regret that I have but one life to give for my country. Nathan Hale

Do not regret growing older. It's a privilege denied to many. Unknown

Never regret. If it's good, it's wonderful. If it's bad, it's experience. Victoria Holt

Regret Quotes for Him or Her

Given the length of this list, there are many quotes on regret. It seems that being regretful is a common occurrence and citing how others feel helps us all to grow.

Speak when you are angry and you will make the best speech you will ever regret. Ambrose Bierce

Youth is a blunder. Manhood a struggle. Old Age a regret. Benjamin Disraeli

Make the most of your regrets...To regret deeply is to live afresh. Henry David Thoreau

We do not regret the loss of our friends by reasons of their merit, but because of our needs and for the good opinion that we believed them to have held of us. La Rochefoucauld

Today I bent the truth to be kind, and I have no regret, for I am far surer of what is kind than I am of what is true. Robert Brault

I do not regret one professional enemy I have made. Any actor who doesn't dare to make an enemy should get out of the business. Bette Davis

Accept life, and you must accept regret. Henri F. Amiel

Many of us crucify ourselves between two thieves - regret for the past and fear of the future. Fulton Oursler

My one regret in life is that I am not someone else. Woody Allen

We hope you've enjoyed these regret quotes and can appreciate them for what they are. Think about ways of using them as part of an apology to express a specific sentiment. View our quotes on being remorseful or our collections of Sorry quotes.