Remorse Quotes: On Being Remorseful

Below is our listing of "remorse quotes" (gathered from public sources) that we found to be particularly interesting and meaningful. 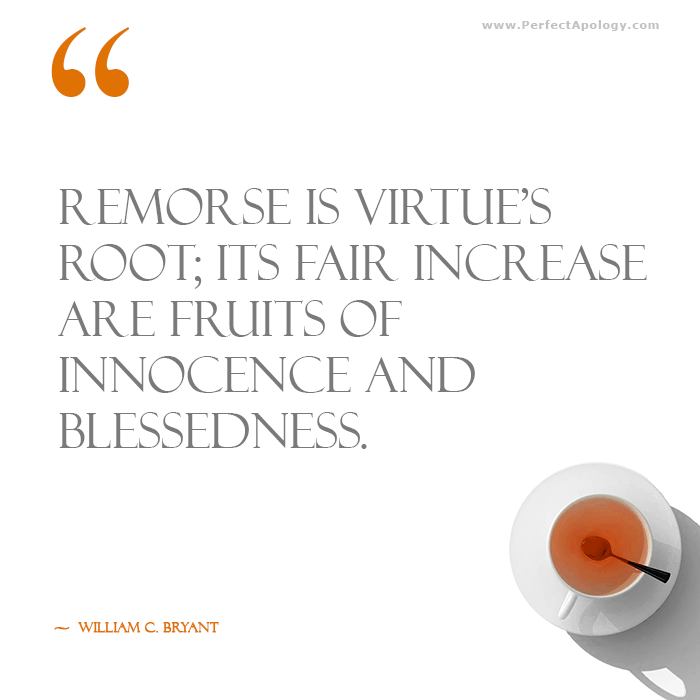 Remorse is the punishment of crime; repentance, its expiation. The former appertains to a tormented conscience; the latter to a soul changed for the better. Joseph Joubert

Prefer loss to the wealth of dishonest gain. The former vexes you for a time the latter will bring you lasting remorse. Chilo

Total self-esteem requires total and unconditional acceptance of yourself. You are a unique and worthy individual, regardless of your mistakes, defeats and failures, despite what others may think, say or feel about you or your behavior. If you truly accept and love yourself, you won't have a driving need for attention and approval. Self-esteem is a genuine love of self. Stop all adverse value judging of yourself. Stop accepting the adverse value judgements of others. Purge yourself of all condemnation, shame, blame, guilt & remorse. Unknown

Never feel remorse for what you have thought about your wife; she's thought much worse things about you. Jean Rostand

The abuse of greatness is when it disjoins remorse from power. Mary Bertone

Remorse goes to sleep during a prosperous period and wakes up in adversity. Jean-Jacques Rousseau

Remorse is the pain of sin. Theodore Parker

Remorse is virtue's root; its fair increase are fruits of innocence and blessedness. William C. Bryant

Below are some more recent additions to our list of remorse-quotes. If you know of any quotes that you feel should be added to our list, please contact us we'd love to hear about them.

Our repentances are generally not so much a concern and remorse for the harm we have done, as a fear of the harm we may have brought upon ourselves. François, Duc De La Rochefoucauld

Be quiet! Anyone can spit in my face, and call me a criminal and a prostitute. But no one has the right to judge my remorse. Jean-Paul Sartre

Remorse is cureless, the disease not even God can heal. Emily Dickinson

Remorse is impotence; it will sin again. Only repentance is strong; it can end everything. Honore De Balzac

Farewell, remorse: all good to me is lost; Evil, be thou my good. John Milton

Remorse is the echo of a lost virtue. Edward G. Bulwer-Lytton

We hope that you've enjoyed this collection of remorse quotes. View our quotes on regret or our collections of apology quotes.