The differences between remorse and regret are important, because the language, tone, content and approach we use for an apology should be appropriately tailored to the relevant action or consequence. 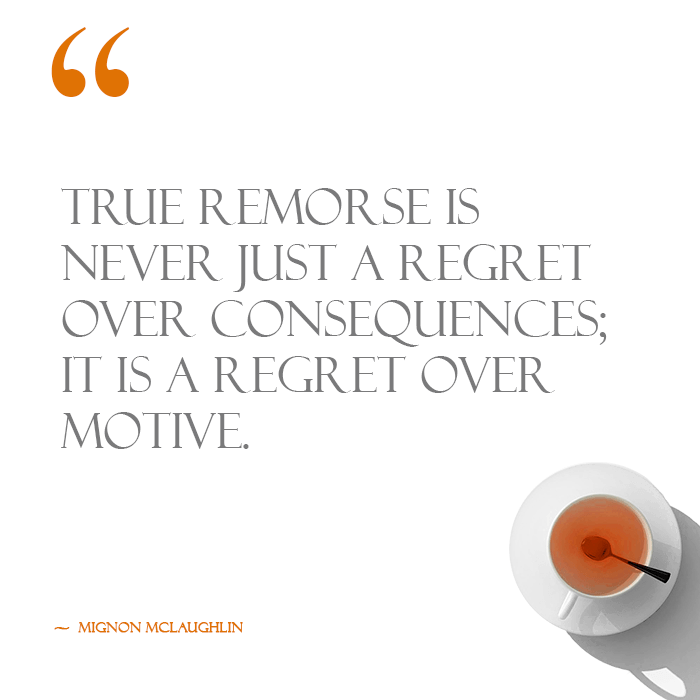 Perhaps the most important distinction is between intentional (avoidable) and accidental (unavoidable; unintended) errors.

Regrets for the consequences of a rational decision require perfect apologies that express compassion for the person who suffered the effects of the decision (e.g. cancelling the flight due to bad weather). Regrets typically focus on relatively minor adjustments to standard operating procedures and rarely produce major changes.

On the other hand, expressing remorse and genuine sorrow for the pain caused by the wrong decisions we've made usually involves some form of internal change, personal improvement/development or self-learning.

It can be as innocuous as a case of buyer's remorse, which is a common phrase used to express guilt and shame at having bought something for the wrong reasons or that we couldn't afford, or something much more grave in nature.

Remorse is driven by feelings of shame or humiliation and is far more personal in nature, often requiring apologies that include some promise or clear commitment to change something within us.

These feelings, in other words, force us to question who we are and what our values are. They often lead to deep reflections about what we did and push us to re-evaluate our assumptions, preferences, and priorities because of the pain we've caused.

It's very important to avoid mixing strategies and to take the time to craft an appropriate apology that addresses the right problem. The biggest mistake made by many compulsive apologizers is the tendency to apply remorse strategies for situations that call for expressions of sincere regret.

Compulsive apologizers sincerely mean their apologies, but they seldom have anything to apologize for except their accidental wrongs. They are truly remorseful. But such people devalue the worth of their apologies by apologizing so readily that their apologies become nervous tics. They find themselves apologizing for harms they did not commit or, in an especially extreme variant, apologizing to the person who harmed them. 1

Consider, for example, the negative ripple effects of a correct decision to cancel a flight because of bad weather. The effects are often compounded by a series of follow-on actions and consequences that were more intentional and avoidable—for example, an angry and dismissive ticket agent responding to yet another angry customer demanding a seat on the next available flight out.

The unintentional nature of the main problem, the cancelled flight, will always be secondary to the much larger sense of loss and pain suffered by the customer as a result of a smaller but intentional error related to the angry, dismissive ticket agent.

The point is that in many business setting apologies to customers should be designed to pre-empt complaints by focusing on remorse rather than regret. Apologies for an inconvenience, while appropriate, may not be as effective as an apology that not only accepts responsibility but expresses both of these sentiments for the terrible experience the customers have been through.

Acknowledging rather than dismissing these feelings and the anguish and time commitment of having to reschedule plans is essential for a perfect apology in these cases. Even if the consequences are completely out of the control of the company, and even if the decision was the right one, an apology that acknowledges the pain and accepts the need to deal with these issues will go a long way toward sustaining customer loyalty and satisfaction.

Well crafted business apologies can create the impression that the company is truly remorseful and really cares about its customers and their continued patronage. This is often and most clearly expressed through compensation and restitution and is exactly what made, for example, the Disney's Customer Service policy on apologies and JetBlue's apology both so successful.

The point is—when in doubt be remorseful, regardless of whether the mistake was serious or unavoidable. Erring on this side can never hurt, and the more serious errors occur when a mistake calls for an apology of remorse but expresses only regrets. This is a common trap that many of us fall into in both our business and personal lives.

Learn about remorse and its role in forgiveness.

Or, view our collection of quotes on remorse.